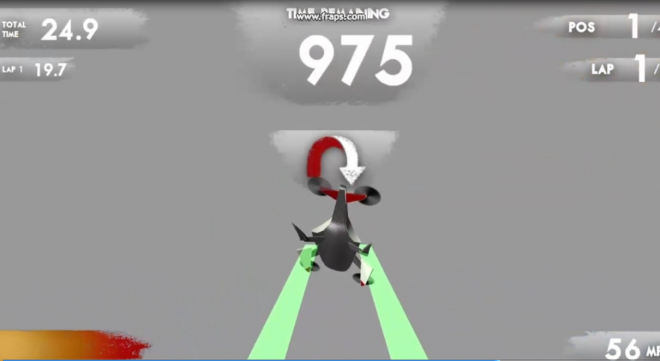 My latest piece of work as graphical work on Xtreme Drone Racing has been to dynamically render wind trails in Phyre engine – to demonstrate where the drone has been flying.

It was interesting work, trivial in principle but not trivial in implementation. I render a quad (the primitives I were using were triangle strips) at the position of the drone and orient it with the drone. All subsequent rendered quads join from the two vertices on the previous quad with two anchor points on the drone itself. After time the quads that make the trail are no longer rendered. I don’t dynamically allocate memory each update for these quads as that would be quite costly – instead I allocate a cache of them and recycle the prior allocated quads.

I plan on putting a texture on the rendered trails, rather than a solid colour (I quickly added one of my shaders to give it the solid colour and additive blend that is on it now). I will have to do that via the engine at a later date.

Oh and I now have my water shader working on the PS4!