Please use the menu bar at the top to navigate to the different pages on my site, which includes a portfolio, academic background, code examples and videos.

I am a senior C++ programmer working at Inspired Entertainment. My duties involve me developing, debugging and reviewing C++ code and committing it to source control, so that its functionality within the context of games under development may be reviewed by our quality assurance teams. 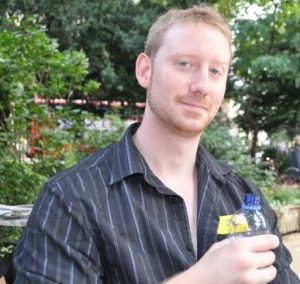 I am also involved in testing and analysing the statistics of our games under development, which is a necessary test due to their inherent stochasticity. Additionally, I interview and recruit new staff, and mentor and train-up junior developers.

I have thus far contributed to the development a number of retail slots and table games including Book of the Irish, Chief, Black Dragon, Fruit Climber and Ninja Monkey, which involves expanding reels and became the face of the new ‘Flex’ curved-screen cabinet. I have also developed a number of in-house tools to aid game development using C# with WPF (Windows Presentation Format).

I have ten years of prior programming experience as a computational biologist, where I developed simulation models using systems of ordinary differential equations and (spatial) individual-based modelling techniques. A lot of my data analysis used Bayesian techniques to draw conclusions (including Markov-chain Monte Carlo), and I was constantly developing software tools and scripts for this analysis. I have published in peer-reviewed scientific journals (see the publications section on the given LinkedIn link).

I previously studied at the Gamer Camp Pro course at Birmingham NTI (http://www.bcu.ac.uk/gamer-camp), a course endorsed by Sony Computer Entertainment Europe (SCEE), Codemasters, Rare, Exient, TT Fusion, FreeStyleGames, Lab42, PlayMob and UKIE. I co-developed a racing game called XTreme Drone Racing for the PS4 using Sony Phyre engine and an action platformer for iOS called Picatsso . I was the code liason and lead for the programming team. On both games I contributed to the graphics programming, camera programming, gameplay programming and AI programming. I was also a liaison between the code team and the executive team on both projects.

I have given oral presentations/seminars at scientific conferences including the American Phytopathology society (http://www.apsnet.org), the European Foundation for Plant Pathology (www.efpp.net) and at the Population Genetics Group (http://www.genetics.org.uk/Conferences)