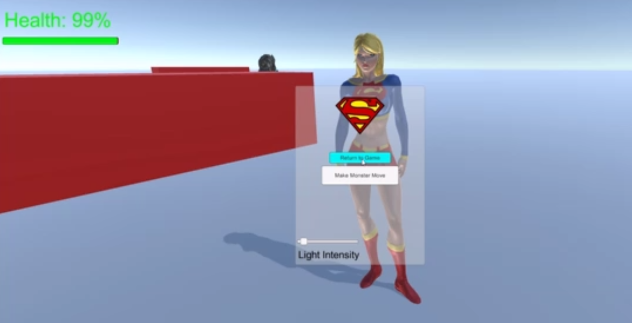 You will notice the enemy is now running towards Supergirl when instructed to by the UI. I have used UI’s pathfinding system. Navmeshes have been placed on the floor and he is using Unity’s A* implementation to find Supergirl, as controlled by my custom script. In order to prevent him crashing into supergirl and causing aberrant behaviour, you need to stop him infront of her. This is simply achieved by subtracting off from his destination a multiple of his foward z vector.

I have been experimenting with Unity’s UI system and have been placing it into my supergirl game to represent a prototype HUD and menu. It’s still in its infancy but provides a framework to build upon. I have so far included:

Unity’s easy to use system allows functionality to be easily plugged in, making the monster follow its A* path, or affecting the light intensity of the directional light in the scene. These functions obviously won’t be exposed in later versions of the game, however they illustrate with what ease the UI system can be used to modify game parameters.